Every year the Whyalla and Mount Laura Lions Clubs join forces to host, collect and distribute donations raised at "Carols In The Park" to worthy community causes.

Our 2011 event is proud to announce that this year's recipients are:


Secretary of the Whyalla Lions Club, and treasurer of the "Carols in the Park" Event Committee Allan Smith said "This year our funds total $4000 and our Event Committee look forward to continuing this annual assistance to Whyalla community causes in the future".

Mr Smith said "We are very proud that this event has grown to become a great opportunity for Whyalla to celebrate Christmas as a community - and also a significant donor to local people and organisations in need". 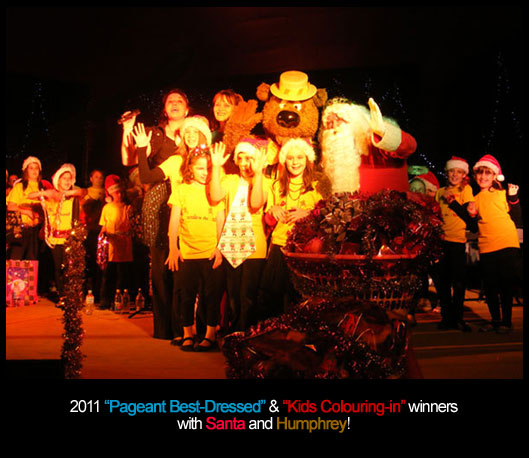 A record crowd estimated at over 5500 attended another wonderful
LIONS Onesteel "Carols In The Park"
in Whyalla's Civic Park last night!

Special guest Humphrey B. Bear once again proved
a crowd favourite after his 2009 debut at the event -
and a record 63-strong "Carols Community Choir"
had all of Whyalla singing along throughout the night. 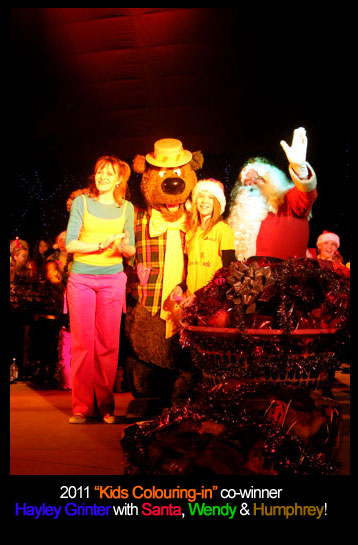 After a record number, and standard of entries our 2011
Kids Colouring-in Competition WINNERS were announced -
Erin O'Halloran (Age 8) and Hayley Grinter (Age 11) took home a
huge prize basket & photo with Santa and Humphrey as a souvenir of their success! 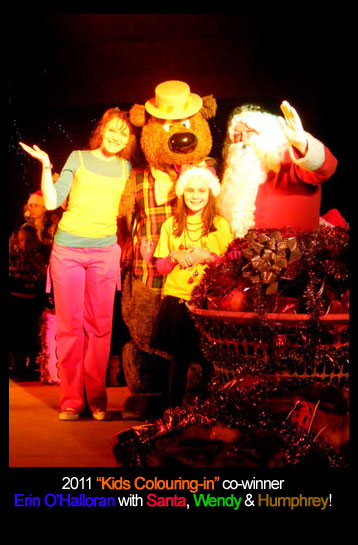 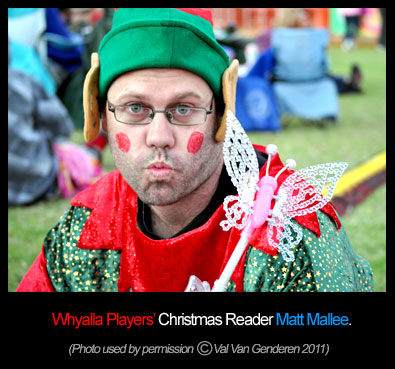 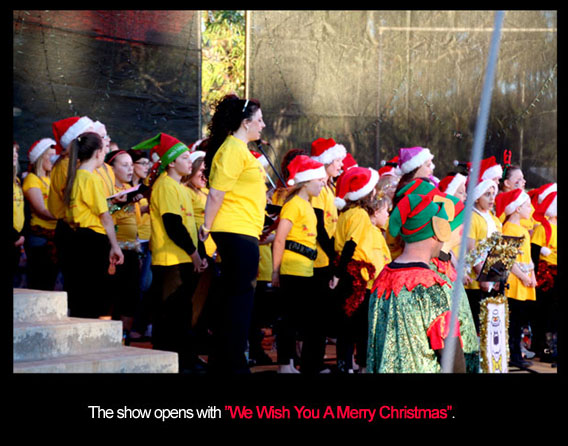 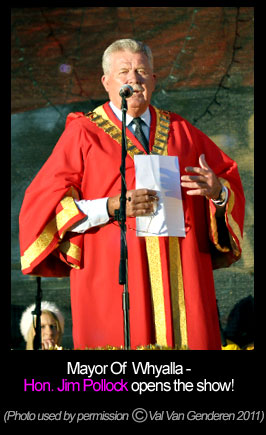 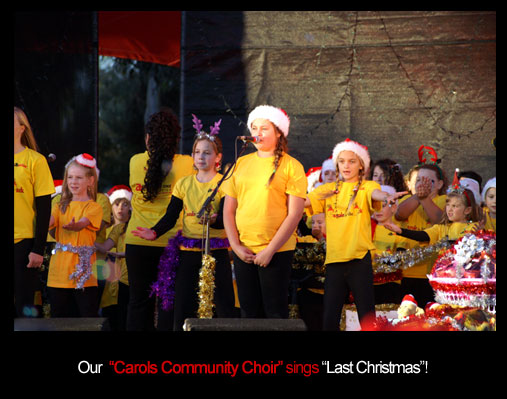 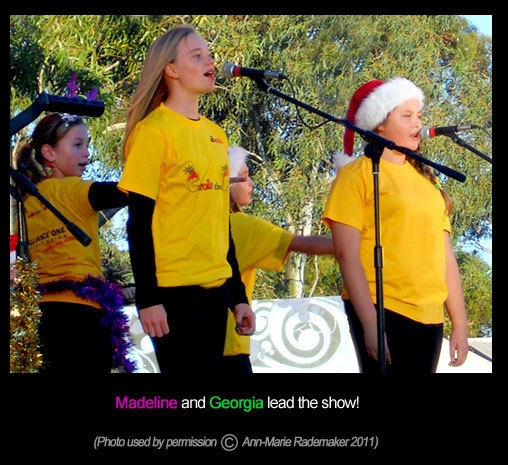 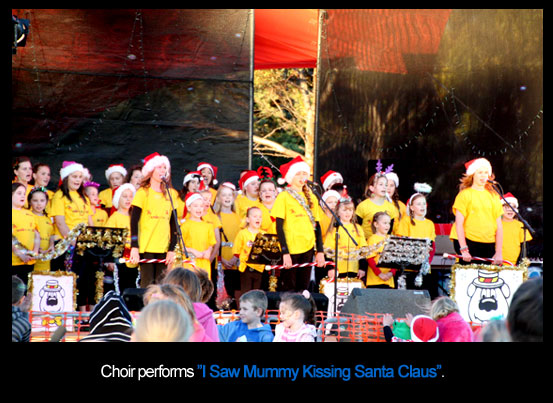 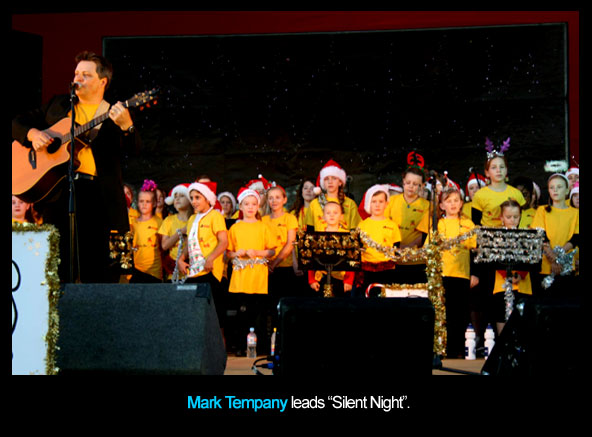 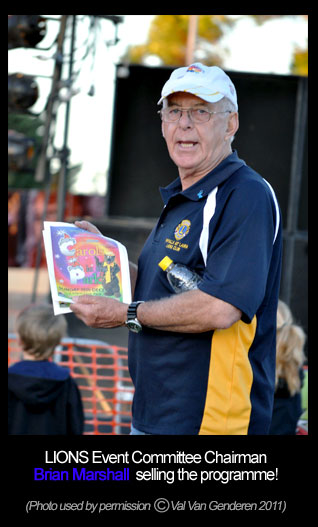 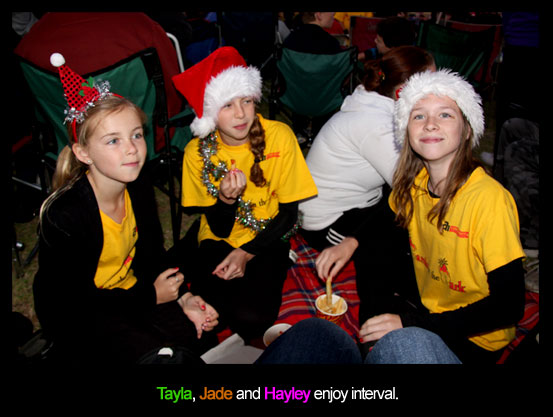 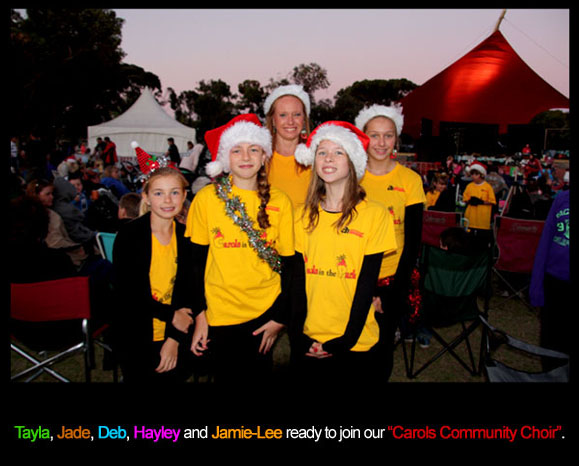 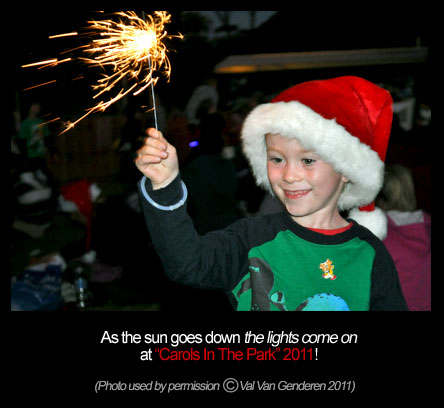 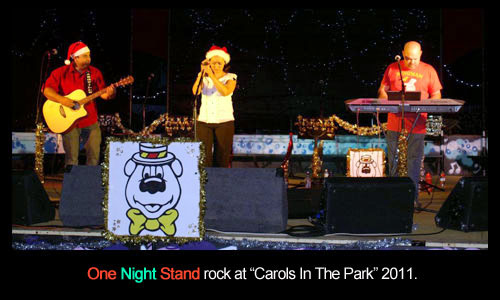 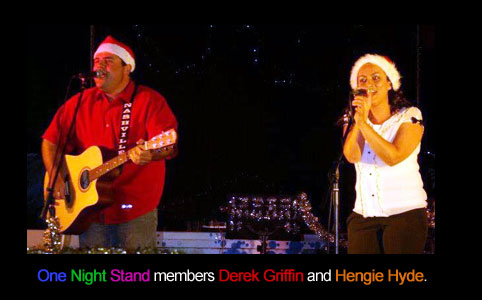 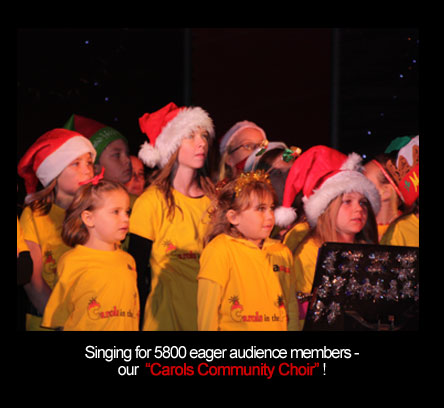 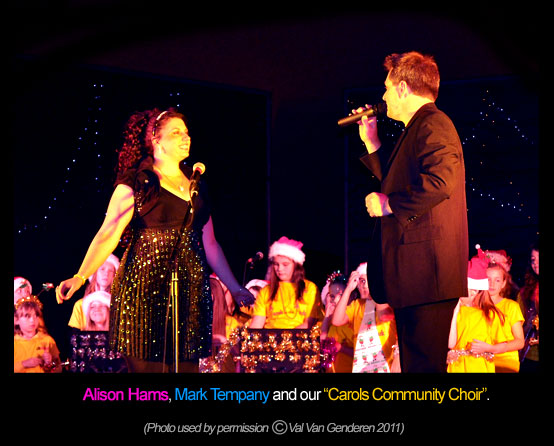 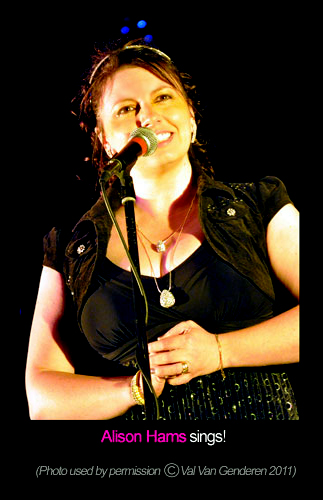 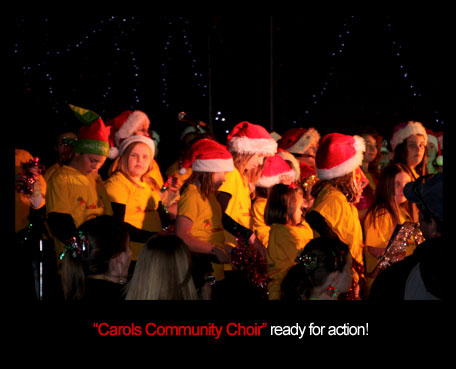 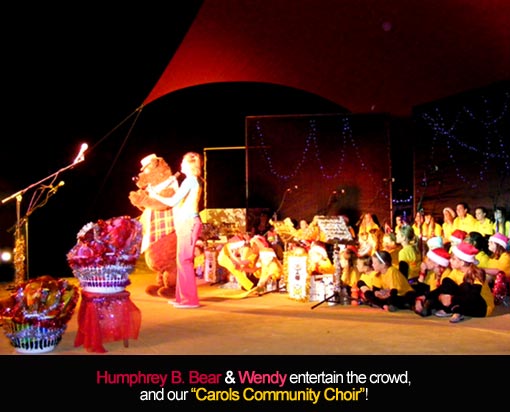 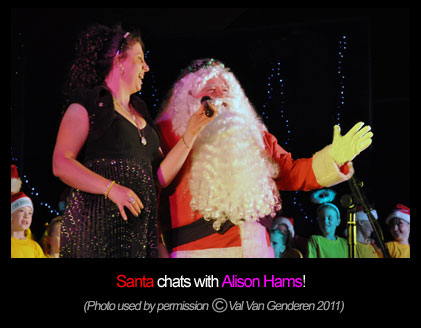 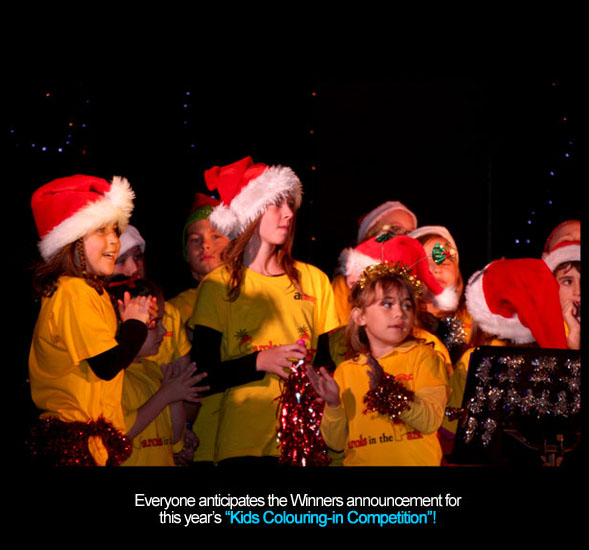 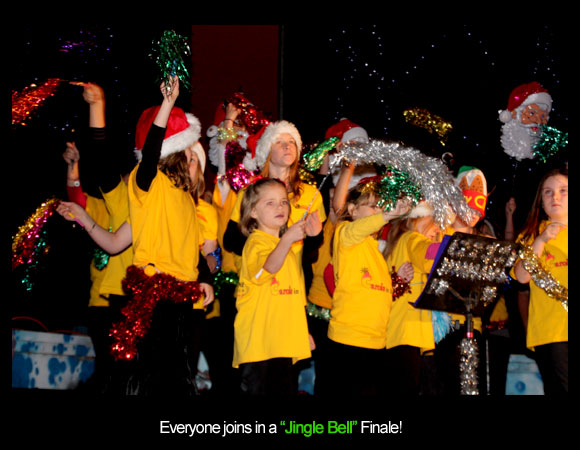 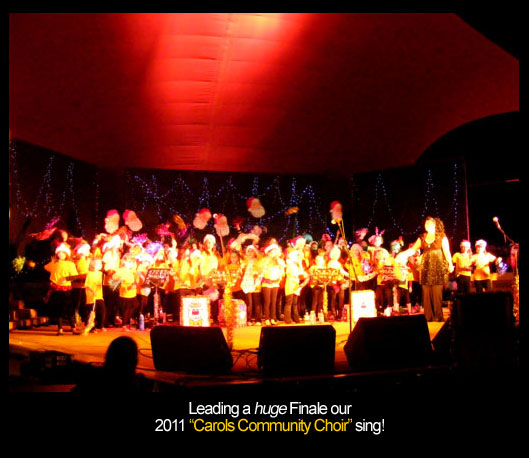 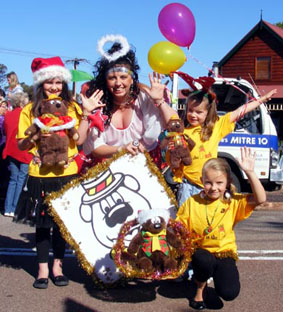 A biggest-ever group of 39 "Carols Community Choir" members volunteered their time and enthusiasm to present a walking float promotion in the APEX Christmas Pageant through the streets of Whyalla on Saturday 26th November.

This marks the third year this highly successful initiative has succeeded as part of the annual opening to Whyalla's Christmas season - and 2011 saw a bumper crowd line the 2km route under beautiful sunshine and mild temperatures.

Our walkers provided fun, colour and great profile for LIONS Onesteel "Carols In The Park" - to stage in Civic Park on SUNDAY 11th DECEMBER 2011.

This year special focus was placed on 2011 Feature Act Humphrey B. Bear who returns to "Carols In The Park after his very popular debut in 2009!

LIONS Onesteel "Carols In The Park" is the biggest FREE public concert presentation in regional SA! 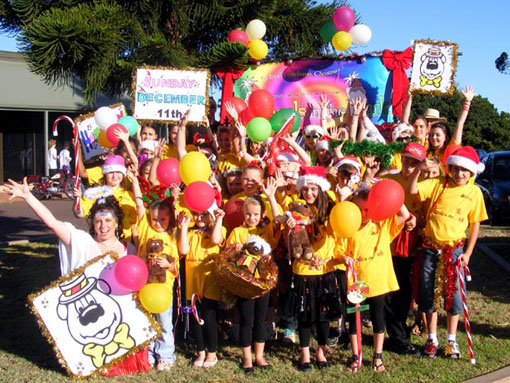 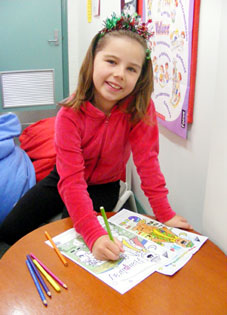 ABOVE:
Brianna Bolitho gets her 2011 entries ready!

Our annual Kids Colouring-in Competition is off and running with entries already streaming in before the 8th December deadline.

Offering a fantastic prize basket - and the opportunity to have yourself photographed on-stage with Santa and Humphrey B. Bear at 2011 LIONS Onesteel "Carols In The Park" - the contest is going from strength to strength with entry forms being distributed by the Whyalla and Mount Laura LIONS Clubs to every school and childcare facility in Whyalla.

Entry forms are also available 24 hours-a-day right here at our website - so kids get colouring NOW to give yourself a chance at winning a truly wonderful experience!

The Combined LIONS Clubs Of Whyalla are excited to announce the return - by popular demand - of Aussie kids icon Humphrey B. Bear as Feature Act for this year's "Carols In The Park" to be staged in Civic Park on Sunday 11th December.

The event - voted "Community Event Of The Year" at Whyalla's 2010 Australia Day Awards - is now South Australia's biggest FREE regional concert event and last year staged to a crowd of over 5500 people.

LIONS Event Committee Chairman Brian Marshall said "We're very proud to have the legendary Humphrey B. Bear coming to Whyalla for the second time to share Christmas with us in Civic Park and we know the city is in for a fine evening's entertainment".

Mr Marshall also said "Carols is the culmination of a full year's work by a big team of talented and committed people from the Whyalla community - and we are very proud of what this wonderful community event has become".

"Our committee has also mailed an invitation to Santa at the North Pole in the hope he will again be able to call by Civic Park even though his schedule is so busy come December time".

Humphrey returns to Whyalla after his delightful debut appearance at "Carols In The Park" in December 2009.