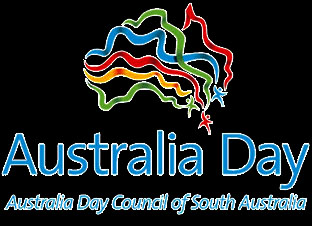 "Carols In The Park" 2009 has today been announced as the WINNER of this year's Whyalla "Event Of The Year" at the city's annual Australia Day Awards!

LIONS Event Committee Chairman Mr Greg Byrne accepted the prestigious honour on behalf of all service club members who participated and to the host of local sponsors who supported the event - staged free in Civic Park on Sunday 13th December for a crowd of almost 5500 people.

Mr Byrne also paid special thanks to the on-going support received from Whyalla City Council, to Whyalla-based Stormfront Productions who have produced the event's stageshow for the last 3 years - and to this year's very special and popular guest Mr Humphrey B. Bear.

"Humphrey's appearance was enormously popular, the local cast were absolutely fantastic and this award makes all who've been part of this great community event feel satisfied we've really achieved something for the people of Whyalla" Mr Byrne said. 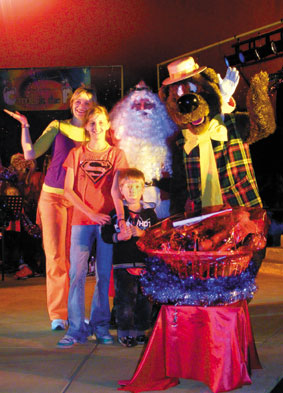 Whyalla's annual "Carols In The Park" has been hailed a success after staging to massive crowd of over 5000 people in Civic Park last night!

Event Committee Chairman Greg Byrne said "Tonight was the culmination of months of volunteer effort by The Combined LIONS Clubs Of Whyalla and Whyalla City Council - and we are absolutely delighted the night has gone so well!"

Mr Byrne paid special tribute to his team who assisted on the night, and to a host of local sponsors including Onesteel, Whyalla News and community radio station 5YYY 107.7FM who will broadcast the event to Whyalla from 6.00pm on Sunday 20th December and Friday 25th December 2009 for the very first time.

However the greatest cheers were reserved for special guest Humphrey B.Bear and - just when it was feared he may not arrive in Civic Park - Santa Claus himself magically appeared.

Humphrey is simply the biggest star in the history of Australian children's television - and Father Christmas once again proved that Whyalla holds a special place in his heart by attending.

Perhaps the luckiest people on the night were prize winners Meg Sheasby (Pageant "Best Dressed" Award) - and 2009 Kids Colouring-in Competition WINNER Natalie Pedulla who received her huge Christmas Prize Basket, and a photo with Santa & Humphrey on-stage during the show. 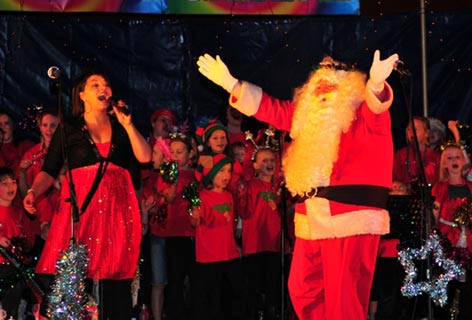 Santa with Alison Hams and Choir! 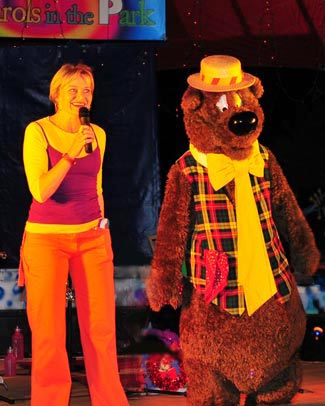 Judges from The Combined LIONS Clubs Of Whyalla were faced with a tough choice yesterday to select a winner from a record number of entries (nearly 200!) into this year's "Carols In The Park" Kids Colouring-In Competition.

Event Committee Chairman Greg Byrne said "There were so many excellent entries this year obviously a lot of Whyalla kids are gearing up for "Carols In The Park" and the Christmas season ahead".

HOWEVER, a decision has been reached and this year's lucky winner will be announced tomorrow night at Civic Park in front of an anticipated massive crowd!

Our 2009 winner will receive a Christmas Prize Basket valued at $200, plus the opportunity tomorrow night to have a souvenir photo taken on-stage with Santa and Humphrey B. Bear during "Carols In The Park"! 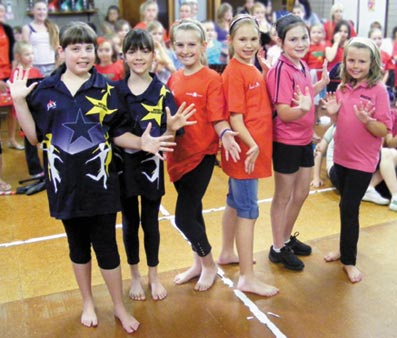 "CAROLS IN THE PARK"
READY TO GO!

Whyalla is once again looking forward to a fantastic night of free family entertainment at Civic Park on Sunday night, December 13th.

Whyalla's "Carols In The Park" is set to stage on Sunday at 7.15pm, with a host of local singers, dancers and actors preparing to celebrate Christmas alongside this year's special guest - iconic children's character Humphrey B. Bear.

Organisers say "Carols In The Park" Kids Colouring-in Competition entries have been flooding in and entry forms can still be downloaded along with information on the night at:
www.whyallacarols.com. 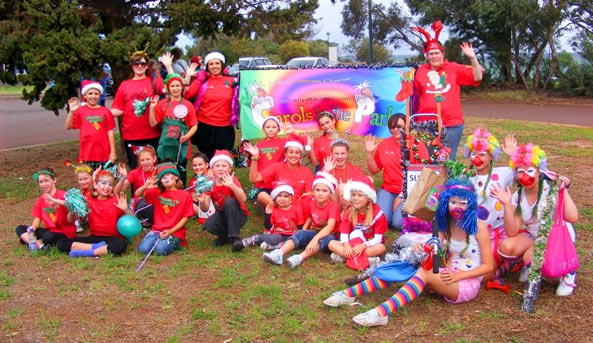 "CAROLS IN THE PARK" at
CHRISTMAS PAGEANT!

Sunday 28th November has seen members of our "Carols Community Choir" participate for the first time in the annual APEX Whyalla Christmas Pageant!

Dressed in red and singing songs to feature at Civic Park in a little over 2 weeks time, our Pageant walkers and colourful banner were a hit with the big crowds lining Whyalla's streets.

This year's Pageant promotion was an initiative of Stormfront Productions & The Combined LIONS Clubs of Whyalla.

Our 2009 event has just received confirmation of a nationally-significant agreement between community radio station 5YYY FM and "Carols In The Park".

The deal will see the 2009 event recorded live and delay-broadcast to the Whyalla region on Sunday 20th December, and again on Christmas Day 25th December 2009!

This deal truly cements "Carols In The Park" as a pivotal part of the Whyalla community, and as a tangible focus of Whyalla's Christmas celebrations.

Chairman & Technical Director of 5YYY, Brett Prince, said "This event has never been broadcast before, and we are honoured to be the first to present this great community event to the Whyalla community. 5YYY look forward to this being the first of many broadcasts to come on our station." 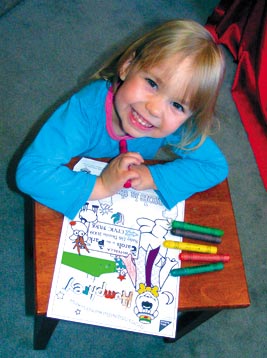 Bethany Hall, 3, getting in some practice for
this year's Kids Colouring-in Competition!

Whyalla LIONS "Carols In The Park" has launched it's annual children's colouring-in competition in conjunction with this year's event to be staged in Civic Park on Sunday 13th December.

This year's winner will be announced on the night and will receive a gift-filled Christmas Basket plus the opportunity to have a photo taken with their family on-stage with Santa and special guest Mr. Humphrey B. Bear.

Organising committee chairman Greg Byrne said the contest was open to all children under 13 years of age, with entry forms currently being distributed through all Whyalla childcare centres, primary and pre-schools.

Forms are also downloadable from
the event's official website:
ww.whyallacarols.com

Our 2009 "Carols In The Park" Kids Colouring-in Competition is up and running, and is open to all kids under 13 years of age at time of entering.

Entries must be received to:

This year's result will be announced at "Carols In The Park" on Sunday 13th December - with the lucky winner receiving a Christmas Prize Basket as well as the opportunity for them and their family to have their picture taken on-stage with Santa & Humphrey B. Bear at Civic Park on 13th December 2009.

Entry forms will soon to be distributed by The Combined LIONS Clubs Of Whyalla to all Whyalla primary schools, pre-schools and kindys -
and are available below by download.

This year's competition is generously sponsored by Whyalla Office National, and the winner will be judged by members of our Event Committee.

Last year's competition had a record number of entries, and encouragement certificates will again be given to outstanding entries.

One of Australias favourite and most iconic childrens characters, Humphrey B. Bear, will star in Whyalla at this years LIONS "Carols in the Park".

Although more than four months away, plans are well under way to provide the community with another top Christmas event on Sunday December 13th.

Humphrey B. Bear has been entertaining Australians for decades and event chairman Greg Byrne believes such a headline visitor at this years concert should prove an absolute winner.

Humphreys presence, in conjunction with early planning, is sure to be a crowd-pleaser with a potential record crowd likely.

Mr Byrne said that the evenings program was being organised by Stormfront Productions on behalf of the Lions clubs. Further details would be announced progressively as arrangements were finalised.

But now is the time to mark the date on the calendar to ensure it is kept free, Mr Byrne said.

"Carols in the Park" is a FREE community event staged by the combined Lions Clubs of Whyalla with support from One Steel, Whyalla City Council and many other local sponsors.

Whyallas two Lions Clubs took over the reins of the annual event last year to allow former organisers for many years, Whyalla Apex Club, to focus on running the Christmas Pageant and After Pageant Fair.

"Carols in the Park" will not only provide the community with an excellent Christmas concert, but raise money for local charities.

Residents can stay in touch with development of the event
through it's official website....

"Carols In The Park"
will stage in Whyalla's Civic Park on 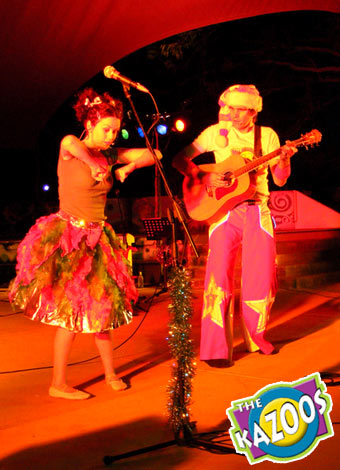