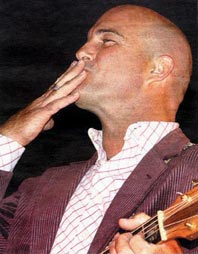 James Blundell wooing the massive crowd
at "Carols in the Park" 2006.

Last night saw an incredible, record-shattering crowd of over 5000 people attend Whyalla's "Carols in the Park"!

As darkness settled over a beautiful clear evening - Civic Park became awash with twinkling lights as the massive audience enjoyed the marvellous programme of music and Christmas cheer.

Event Co-ordinator - APEX Club of Whyalla's Leon Budden said "the 1500 Official printed Programmes sold out in less than 20 minutes, as did our supply of candles and glowsticks. Everyone was absolutely delighted with the turnout, and the stellar show!"

Musical Director, Alison Hams, said working with the varied and talented cast which included James Blundell, Jessie Che and her band, Whyalla Pipe Band and the St Johns College Christmas Singers was a "real delight". Alison also thanked Georgia and Caitlin Davidson from Whydale Calisthenics for their super effort in performing 2 songs with the band!

Singer and musician Mark Tempany thought the highlight of the night was Santa arriving by beautiful sleigh to meet the children of Whyalla - and our Carols Colouring-in Competition winner, Jenna Daniels", preceded the event finale to accept her prize - a Christmas hamper and a photo on stage with superstar James Blundell!.

For a full photo album of the night: 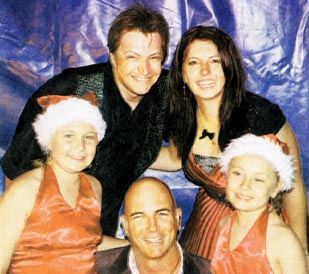 Mark Tempany, Alison Hams and James Blundell with
Caitlin and Georgia Davidson after performing at
"Carols in the Park" 2006.

Superstar James Blundell is currently flying from Sydney - Jessie Che and her fabulous band are driving from Adelaide - and ALL converging on Whyalla for tonight's "Carols in the Park" extravaganza!

Meanwhile at Civic Park, Gavin Chandler and his sound and lights crew will shortly begin their set-up as the APEX CLUB of Whyalla oversees the preparations for tonight's exciting programme.

SO GET READY WHYALLA!
See you in Civic Park from 7.00pm for the biggest free night of music
Whyalla has ever seen! 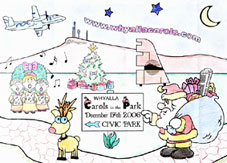 "Carols in the Park" is proud to announce the winner of the inaugural Carols colouring-in competition for kids is.......

Thanks to Whyalla News, Wendys Westlands and Toyworld for their support with this year's competition!

Jenna wins a great Christmas Hamper, and a photo opportunity on-stage with James Blundell at "Carols in the Park" on Sunday 17th December!

Whyalla's own music maestro - Mr Peter Brown - has just been announced as a member of this year's Carols Band!

A true legend - and fine musician - Peter will join Musical Director Alison Hams and members of Adelaide's Jessie Che Band to provide the music behind this years concert - including backing Aussie superstar James Blundell during his performance.

Peter - it's GREAT to have you along for what should be a wonderful ride in 2006!

The winner will be announced in "Whyalla News" on Thursday 14th December, and entry forms can be downloaded above - or obtainable from Wendys Westlands or Toyworld front counters NOW!

So come on KIDS!

Get colouring and make sure all your family and friends are at Civic Park on Sunday 17th December for a great night of music and Christmas fun!

Regional Air Express have just been announced as an official sponsor of "Carols in the Park" for 2006!

REX will donate a return airfare between Adelaide and Whyalla to transport singer James Blundell to town to headline what is sure to be a fantastic night's entertainment. Sponsorship of this nature is a first for "Carols in the Park".

THANK-YOU REX for supporting the Whyalla community this Christmas!

AT 7.15pm on SUNDAY 17th DECEMBER in Civic Park this year's SPECIAL GUEST - Aussie music star JAMES BLUNDELL - will be joining us for a sensational evening of music and family fun!

Along with James, this year's Carols will feature an all-South Australian talent line-up including the JESSIE CHE BAND (Adelaide) , and Whyalla's own country music star (and Carols Musical Director) ALISON HAMS!

...... will be dropping in to Civic Park again to continue his tradition of visiting the good folk of Whyalla before he returns in secret on Christmas Eve!

SO, put Sunday 17th December on your calendar and prepare to be at Civic Park to help Whyalla celebrate Christmas in the best way possible!

Check out our links,
Send us an email or
Sign our Carols Guestbook
and be actively involved in Carols in the Park 2006!